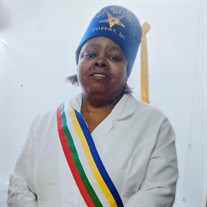 On Tuesday February 15, 2022 Cynthia Ann Johnson (of Bangor, MI) decided she was ready to join her parents in heaven. She fought a long battle with sickness and stayed strong right up until her very last days. She passed while surrounded by her loving family members and is no longer suffering. She was a wonderful mother, sister, aunt, and the best friend a person could have. She had a great sense of humor and a love for horror! She was bold and outspoken, always saying exactly what came to mind. You never had to question where you stood with her because she would let you know! Cynthia was born on November 5th, 1959 in El Paso, Texas to Dasie (Stormer) & Joe Johnson. As a child of an army man, she travelled all over the United States and began schooling at Romulus Central School in Romulus, New York. Upon relocating to Bangor, Michigan, she enrolled in Bangor Public Schools where she would go on to play the trumpet in the band before graduating in 1978. While in Michigan she worked for a handful of companies like Controlled Rubber, Pullman Industries, Rich’s, Stryker, Summit Polymers, and most recently Eimo Technologies. Though she enjoyed her factory work, she had aspirations to become a social worker. She even went back to school and had almost earned her bachelor’s degree. She was a very hard worker and continued on until she physically couldn’t. Cynthia had a serious love for animals. Throughout the years she had several pets including but not limited to bearded dragons, turtles, dogs, cockatoo’s, baby chicks, and even piranhas. Speaking of fish...there weren’t many days where you wouldn’t find her on a fishing hole. She grew up fishing with her grandmother and mother and continued on with her siblings, children, nieces, nephews, and grandchildren. She loved being around her family. If there was an event happening, she was going to be there. Whether it was a softball game, graduation party, or birthday, she showed up. She never stopped showing up. After her mother passed in 2009, and the insistence of her father, she became a member of the Elnora Williams Chapter #254 OES. She joined these ranks that included her own mother, her sister Dorothy, her niece Jessica and her niece, LaToya. She enjoyed traveling to the different functions, dressing up for their themed galas, but most importantly she loved being of service. She had just accepted the role of Worthy Matron with the organization and was excited about the new opportunity to shine on in the footsteps of her fabulous mother. Though she loved her children greatly, she loved being a grandmother even more. Her heart truly belonged to Aundreah, Miciah, and Kayden, her grandbabies. She would take them to the park, the zoo, or even just down the street to the local fast-food joint, anything to spend time with them. She dedicated the later years of her life to being there for them in every way possible. She was present for every birth and made sure they knew how much she cared for them. She always spoke about wanting to take them to Hawaii one day and had starting making plans to do that this past December. Her legacy will live on through them. Cynthia is survived by her children: Sons: Carlos Johnson and Maurice Williams of Bangor, MI and Lakeisha Williams of Kalamazoo, MI. Sisters: Dorothy Coates & Marilyn Johnson of Bangor, MI, Barbara Johnson of Otsego, MI and Suzanna (Rick) Day of Yuma, WA. Brothers: Joe (Duffy) Johnson Jr. of Benton Harbor, MI, Carl Johnson of Muskegon, MI, Bernard (Terica) Johnson of Bangor, MI, Kenneth Johnson of Allegan, MI, Timothy (Angela) Johnson of Kalamazoo, MI and Dusty Stormer of Cleveland, Ohio. Uncles: Theodis Stormer of Bangor, MI and J.B. Stormer of Bedford, Ohio. Grandchildren: Aundreah, Kayden, and Miciah Williams of Kalamazoo, MI. Several nieces and nephews with a special mention of her self-proclaimed favorite, Salina Johnson of Kalamazoo. Last, but certainly not least, all of the wonderful friends she acquired during her 62 years on this earth. She was preceded in death by her parents: nephew; Bobby Johnson and granddaughter; Kehlani Jonae Grace. Brother Raymond Johnson. and brother-in-law; Willie Albert Coates. The family will greet friends on Saturday, February 26, from 10 AM until time of service at 11 AM at the New Jerusalem Missionary Baptist Church in Bangor. Interment will follow the service at Arlington Hill Cemetery, Bangor.

On Tuesday February 15, 2022 Cynthia Ann Johnson (of Bangor, MI) decided she was ready to join her parents in heaven. She fought a long battle with sickness and stayed strong right up until her very last days. She passed while surrounded by... View Obituary & Service Information

The family of Cynthia Ann Johnson created this Life Tributes page to make it easy to share your memories.

Send flowers to the Johnson family.