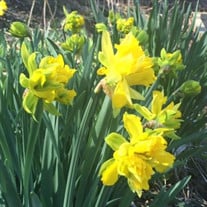 Dorothy Abigail Cross, born September 9, 1924 in Bangor, MI to John Laird and Alice Estelle (Wilcox) Cross, was welcomed into Jesus' arms from her earthly home in Alexandria, VA on April 25, 2022. Dorothy earned a BA from Wayne State University and a MA in Library Science from the University of Michigan. After working in the Detroit Public Library, Dorothy was hired by the US Army and served in Army libraries in Braconne and Poitiers, France; Kaiserslautern, Aschaffenburg, Munich, Stuttgart and Heidelberg, Germany; Fort Bragg, NC; and the Pentagon, Washington, DC. After settling in Alexandria, VA, Dorothy was an active member of the Franconia United Methodist Church and the Alexandria District. She sang in the Franconia United Methodist's Chancel Choir and co-chaired the United Methodist Women with Clementine Bunker. Dorothy became a Stephen Minister and leader of the Franconia United Methodist Stephen Ministry Team. She served on the Board of Directors of Rising Hope Mission Church and volunteered to serve with the Late Rev. Kenneth J. Jackson at the Alexandria District Charge Conference. Dorothy also served on the Kairos Prison Ministry Team for several years, and more recently sang with the choir at the Mount Calvary Community Church. Dorothy enjoyed traveling and music, and loved God and all creatures. She contributed to many animal shelters and fed several neighborhood cats. She will be missed by her many friends and especially her cat, Scamp. A celebration of Dorothy's life will be at Demaine's Funeral Chapel, 5308 Backlick Road, Springfield, VA Thursday, May 5, 2022 at 10 AM. Interment will be with her parents at Arlington Hills Cemetery, Bangor, MI on Wednesday, May 11, at 11 AM.

The family of Dorothy Abigail Cross created this Life Tributes page to make it easy to share your memories.

Send flowers to the Cross family.