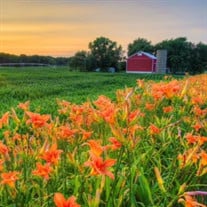 Emma Freimuth was born at home on September 16, 1927, in a small village in Romania, called "Kilometer Funf," a suburb of Costanzia. It was located 5 kilometers from the city near the largest port on the Black Sea. Emmie grew up in a village... View Obituary & Service Information

The family of Emma F. Grentz created this Life Tributes page to make it easy to share your memories.

Send flowers to the Grentz family.