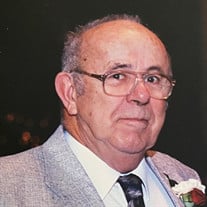 Herbert "Junior" Van Horn, age 87, of Bloomingdale passed away at Allegan General Hospital on January 14, with his family by his side. Herb, more commonly known to all as Junior, was the son of Herbert and Jennett Van Horn, born on August 20, 1934 in Gobles. He was a proud veteran of the United States Navy, serving for 10 years, a veteran of the Korean War, serving on the ship Charles R Ware DD-865. He worked as a machinist for Eaton Corporation for over 42 years. After retiring from Eaton, he worked for Bloomingdale School as a bus driver for 7 years. Junior was instrumental in developing the Little League and the fields in Bloomingdale. He loved the Bloomingdale community, serving as a village trustee for 32 years. He was a member of the Bloomingdale Christian Church, finding his ministry in the Awana Program, helping the kids build their race cars, but he made sure no car he built was faster than his. He was a very competitive person, especially with his family. His favorite things to do were playing golf, watching his favorite teams the Detroit Lions and Detroit Tigers on TV, and going to games with his kids or grandkids. He is survived by his wife, Cherry, whom he married on May 21, 1955, in Alloway, New Jersey. Also surviving are his children, Barb (Steve) Strong of Bloomingdale, Herbert “Mick” (Susan) Van Horn of Sagamore Hills, OH, Tim (Marie) Van Horn of Cheshire; daughter-in-laws, Joanie Van Horn and Vicky Van Horn; 14 grandchildren and 24 great-grandchildren; his sister, Carol(Gary) Begeman; sister-in-law, Nelda Van Horn; and many nieces, nephews and friends. He was preceded in death by his sons, Matthew Scott and Douglas Van Horn; his granddaughter, Kera; great-grandson, Justin; his brothers, Bob and George Van Horn; his sister, Alta Jean Ruiz; sister-in-law, Olive Van Horn; and a brother-in-law, David Ruiz. The family will receive friends for a time of visitation and fellowship on Wednesday, January 19, 2022, from 4-7 pm at the Bloomingdale Christian Church. The funeral service will be on Thursday, January 20, at 11 AM at Bloomingdale Christian Church with Pastor Brett Champion offciating. Burial will follow in Spring Grove Cemetery. In lieu of flowers, the family suggests memorials be made to the Bloomingdale Area School Foundation.

Herbert "Junior" Van Horn, age 87, of Bloomingdale passed away at Allegan General Hospital on January 14, with his family by his side. Herb, more commonly known to all as Junior, was the son of Herbert and Jennett Van Horn, born on August 20,... View Obituary & Service Information

The family of Herbert Junior Van Horn created this Life Tributes page to make it easy to share your memories.