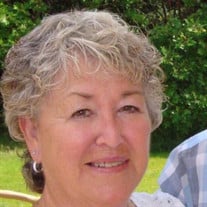 On Monday, July 19, 2021, Lou Anne Pearson, loving wife and mother of four passed away at the age of 79. Born in 1942 in Ann Arbor, MI to Harold and Ruth L’Esperance, Lou Anne was the oldest of two children. In December of 1959, she married Roy English. Together they raised four children, Guy, Julie, Jeff, and Janet in the tiny community of Berlamont. Lou Anne was a warm and nurturing person. She worked in Bloomingdale Elementary School's title one room assisting children with their speech, reading, and learning comprehension. A true hobbyist, Lou Anne was talented in writing and illustration, crafting and basket weaving, dressmaking, quilting, baking, gardening and golf. In 2004, the next chapter of her life began when she married Robert Pearson, a retired builder. Robert built them a house, which they lived happily in until her death. In their retirement they traveled the United States in their fifth wheel camper, exploring national parks and wildlife preserves while enjoying each other's company. Lou Anne was preceded in death by her parents, her husband Roy, and grandson Kyler. She is survived by her husband Robert, her brother Steven (Linda) L'Esperance, children Guy (De Nai), Julie (Bob), Jeff (Renee), Janet, and Bob, seven grandchildren, four great-grandchildren, and extended family. Her grace had no bounds and shall be well received at the gates of Heaven. A private family memorial is to be held at a later date. In lieu of flowers, donations may be made in Lou Anne’s name to Wings of Hope Hospice in Allegan. Arrangements by the Bloomingdale Chapel, D. L. Miller Funeral Home, www.dlmillerfuneralhome.com. "She is clothed with strength and dignity; she can laugh at the days to come. She speaks with wisdom, and faithful instruction is on her tongue. She watches over the affairs of her household and does not eat the bread of idleness. Her children arise and call her blessed; her husband also, and he praises her: 'Many women do noble things, but you surpass them all.' Charm is deceptive, and beauty is fleeting; but a woman who fears the Lord is to be praised." - Proverbs 31:25-30

The family of Lou Anne Pearson created this Life Tributes page to make it easy to share your memories.

Send flowers to the Pearson family.