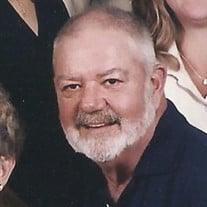 Milford Lee Popp April 17, 1939 – February 21, 2022 Milford Lee Popp passed away suddenly in his sleep at home, February 21, 2022. He was born April 17, 1939 in Geneva Township to Loren and Myrtle (Skinner) Popp. On September 7, 1958 he married his high school sweetheart, Penny Ann Grimes, who survives. Also surviving are his children, daughter, Sherry Clouse of Bangor; son, Jeff (Joyce) Popp of Bangor; daughter, Bonnie (Dave) Lobdell of South Haven; grandchildren, Daren (Hannah) Clouse. Milford loved his family and was the go-to person if they had a problem. He was the rock that his wife Penny clung to. He also will be missed by many extended family members and friends. He was preceded in death by his parents, a sister, Reva (Paul) Kuhn, a brother, Norman (Lillian) Popp and a son, Steven Popp. Milford was a hard worker all of his life, working at times for Getman Construction Co., South Haven, John’s Manufacturing, Lacota, Triple SSS Produce, Bangor and after retirement in 2001 he worked for Lander’s Hardware in Bangor repairing lawn mowers. He loved to fish and watch Nascar and the Detroit Lions on TV. In later years his pole barn was his refuge where he puttered to his heart’s content. According to his wishes cremation has taken place. Memorials may be made to the Bangor Historical Society.

The family of Milford Lee Popp created this Life Tributes page to make it easy to share your memories.

Send flowers to the Popp family.